The CLARREO Pathfinder (CPF) mission has been designed to take shortwave (visible and near-infrared) measurements with sufficiently high accuracy such that they have the ability to more rapidly detect long-term trends than we can currently [Wielicki et al., 2013]. To address this critical need, CPF will strive to meet its two mission objectives: (1) To demonstrate on-orbit, SI-traceable calibration in measuring spectral reflectance (350-2300 nm), achieving an advancement in accuracy (by 5-10x) over existing sensors [Kopp et al., 2017]; and (2) To demonstrate the ability to use that unparalleled accuracy to serve as an on-orbit reference spectrometer for inter-calibration of other reflected solar satellite sensors [Lukashin et al., 2013]. CPF will demonstrate inter-calibration with two other Earth-observing instruments: (1) Clouds and the Earth’s Radiant Energy System (CERES); and (2) Visible-Infrared Imaging Radiometer Suite (VIIRS), on either the Suomi-NPP or NOAA-20 satellites.

The spectral range of HySICS (350 – 2300 nm) includes over 95% of the solar radiation reflected by the Earth’s climate system. Energy within this spectral range drives critical processes including radiative forcing, the climate system’s response, and critical climate feedbacks that modify climate sensitivity. This is why detailed knowledge of the instrument’s calibration accuracy and how it changes in orbit is essential for observing the small, but critical, decadal trends in Essential Climate Variables driving and responding to climate change. Another key benefit from CLARREO Pathfinder measurements is the high amount of information provided by the continuous spectral sampling of 3 nm across its spectral range.

Measurements from a hyperspectral imager like HySICS are typically formatted in what is called a data cube (see the image below). The top face of the cube is a representation of the spatial scene, usually a red-green-blue (RGB) composite similar to a picture taken using a digital camera. But unlike a digital camera or even a typical space-borne imager that acquire measurements at just a few wavelengths, the CLARREO Pathfinder hyperspectral imager makes measurements at several hundred contiguous (neighboring) wavelengths that span most of the solar spectrum. The different wavelengths are represented by a third dimension, making a cube, such as the one below. Peeling off successive “layers” of the cube would reveal images of the same spatial scene at a different wavelengths. Depending on the scene type – for example, clouds, gases, and aerosol particles in the atmosphere, or vegetation, desert, or ocean at the surface – the layers of the cube from different wavelengths provide key information that enable us to determine atmospheric and surface composition far beyond what is possible from a handful of wavelengths. 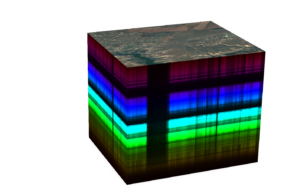 This data cube was created using measurements from one of the HySICS balloon flights. We will be able to create similar such data cubes from CLARREO Pathfinder measurements. The top face of the cube shows a representation of the spatial scene. If we peeled off different layers of the cube, we’d reveal this scene measured at different wavelengths of reflected light. (Courtesy LASP)

The breakthrough advancement in absolute radiometric accuracy enables the CPF payload to serve as an on-orbit reference for other instruments that take measurements within the same spectral range. Inter-calibration of CPF with CERES and VIIRS will lead to improvement of CERES and VIIRS calibration parameters on-orbit including sensor offset, gain, linearity, spectral response changes, and polarization sensitivity. This capability demonstration provides benefits across Earth science because inter-calibration with other instruments results in more accurate data products for more advanced climate monitoring and for testing and improving global climate models.