One of the main science objectives of the CLARREO Pathfinder (CPF) mission is to demonstrate inter-calibration between CPF and CERES (its shortwave broadband channel) and VIIRS (its visible and near-infrared spectral bands). This will be achieved using CPF as an SI-traceable (i.e. metrologically traceable to the International Standard of Units) on-orbit reference to inter-calibrate both CERES and VIIRS. Inter-calibration is the practice of relating measurements from a target instrument to a reference instrument, with a stated uncertainty. Inter-calibration enables improved consistency among satellite measurements by identifying and reducing biases and inter-calibration linear term differences. The critical need for sensor inter-calibration for weather, climate and natural resources research, and applied science studies led to an international effort called the Global Space-Based Inter-Calibration System (GSICS) [Goldberg et al., 2011]. Inter-calibrating two instruments in-orbit is most useful for decadal climate monitoring when at least one serves as a high-accuracy reference with on-orbit traceability to international standards (i.e. SI-traceability). CLARREO Pathfinder will demonstrate the technology and measurement approaches and the analysis techniques needed for an instrument like HySICS to serve as an on-orbit reference for other Earth-orbiting sensors also taking shortwave measurements. 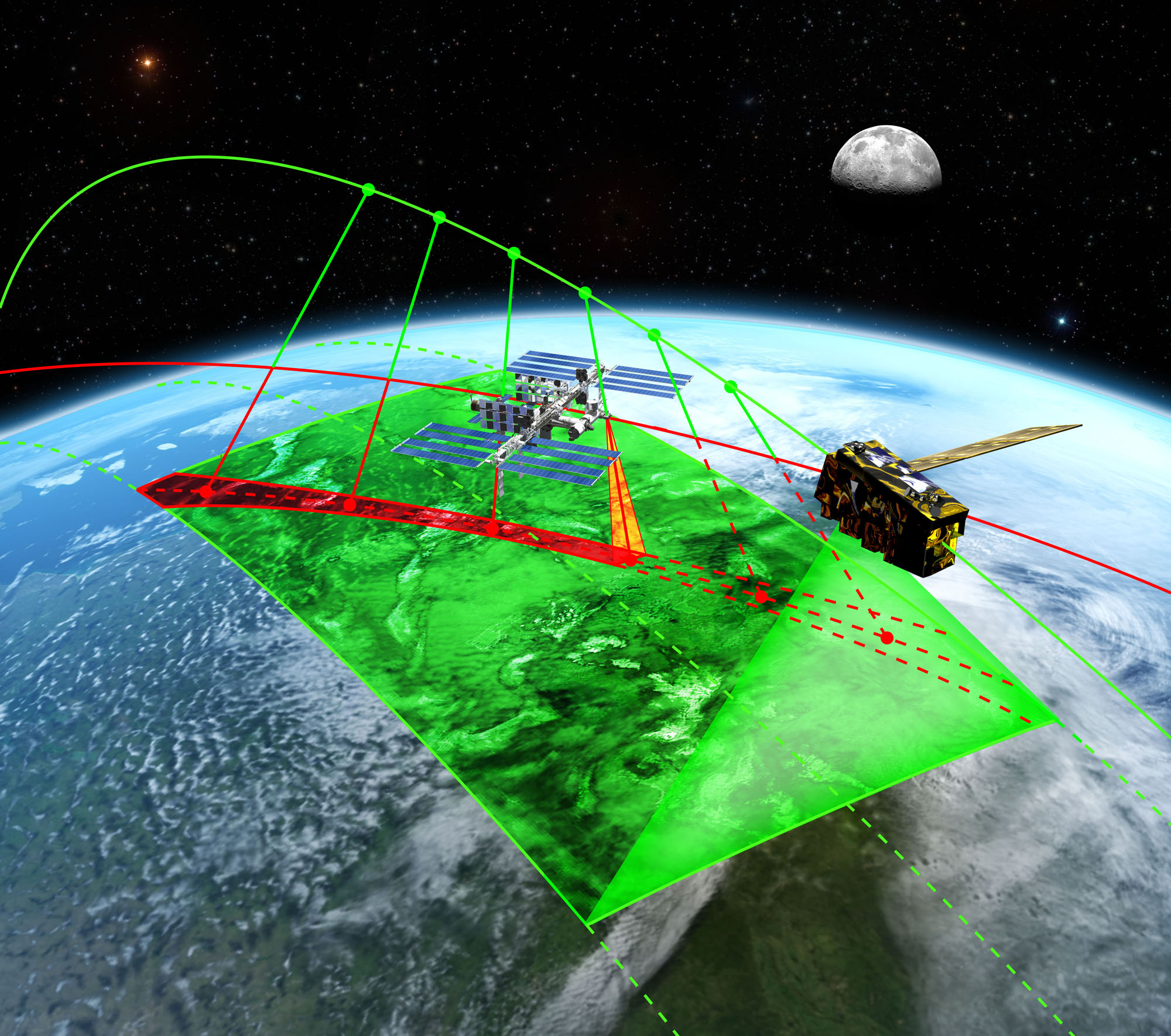 Orbit track of CPF on the International Space Station (ISS) (red) at 400 km altitude and 51.6° orbit inclination, crossing under the Suomi-NPP or NOAA-20 orbit track (green) at ~830 km altitude, in a 13:30 Local Time sun-synchronous 98.7° orbit.  This image illustrates the ability of CPF to match elevation and azimuth angle of inter-calibration targets (CERES or VIIRS). CPF will then scan across the field-of-view of the target instruments during the inter-calibration event, as shown in the animations below. (Courtesy NASA) 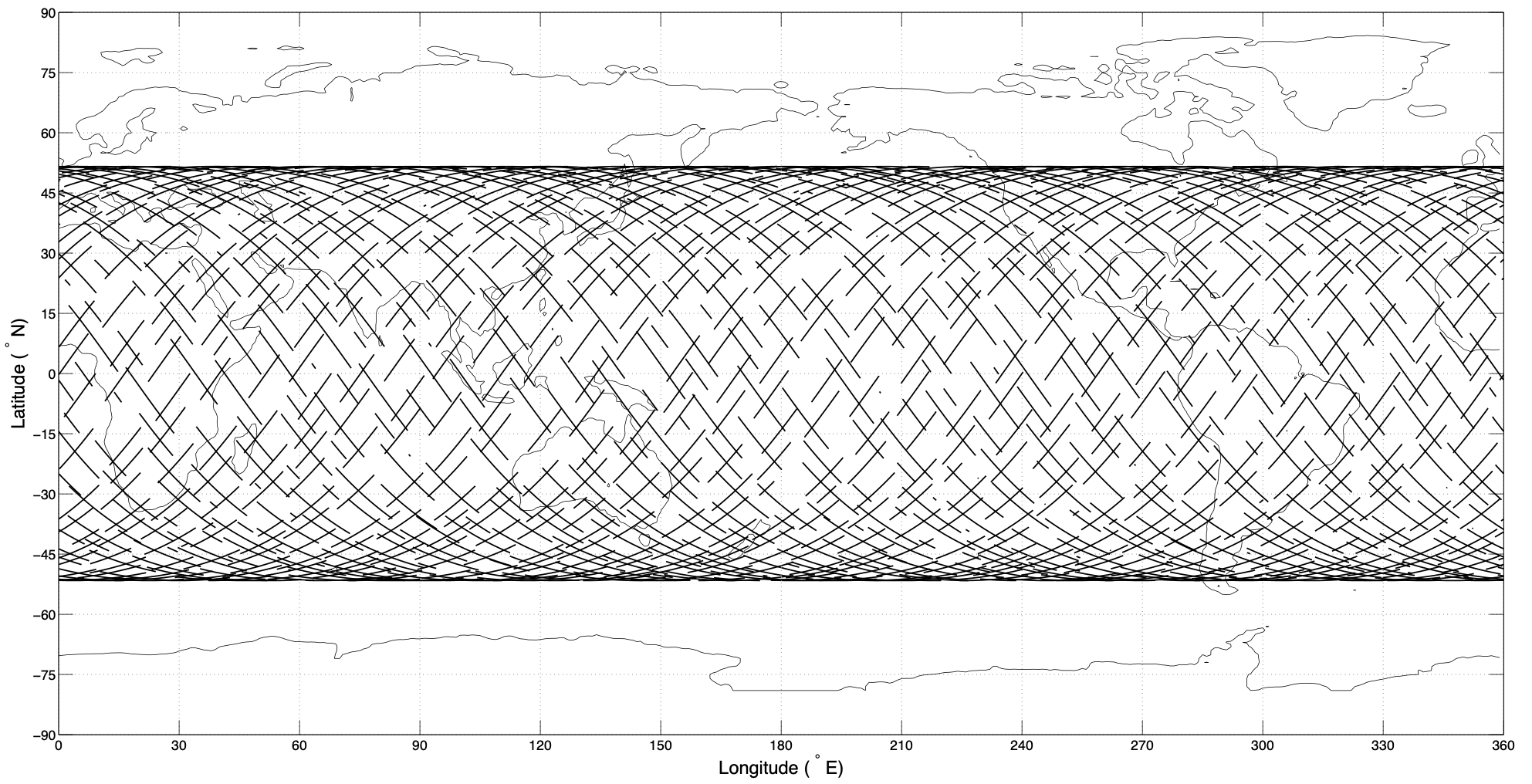 Nominally, CPF will take spectral radiance and reflectance measurements of Earth at nadir. Using predictions of upcoming inter-calibration events, the instrument will rotate to closely match its viewing angle to that of the instrument(s) it is inter-calibrating. (Courtesy NASA)

The CPF instrument will also position itself to take direct measurements of lunar spectral reflectance. This will be done throughout the one year of prime mission operations to span a wide range of lunar phase angles and librations. The range of lunar phase angles observed are specified by instrument operations; the librations observed are governed by the orbits of the ISS and the Moon. Taking a year of measurements will build up a substantial database of high accuracy lunar spectral reflectance measurements that will be used to update the USGS ROLO (Robotic Lunar Observatory) model [Stone et al., 2008], which constitutes the lunar calibration reference. These updates reduce the uncertainty of the Moon as an on-orbit calibration reference by approximately 10 times. The resulting improvements in the absolute reflectance of the lunar surface can be used to tie measurements from other reflected solar instruments to CPF measurements even after the lifetime of CPF, thanks to the stability of the reflectance of the lunar surface [Kieffer, 1997; Kieffer and Stone, 2005].