The Hyperspectral Imager for Climate Science (HySICS) is an imaging spectrometer developed by the University of Colorado at Boulder’s (CU-Boulder) Laboratory for Atmospheric and Space Physics (LASP). The HySICS design builds upon 10+ years of LASP-led science research and technology development. HySICS is the heart of the CLARREO Pathfinder payload as the core subsystem that measures spectrally-resolved reflectance. 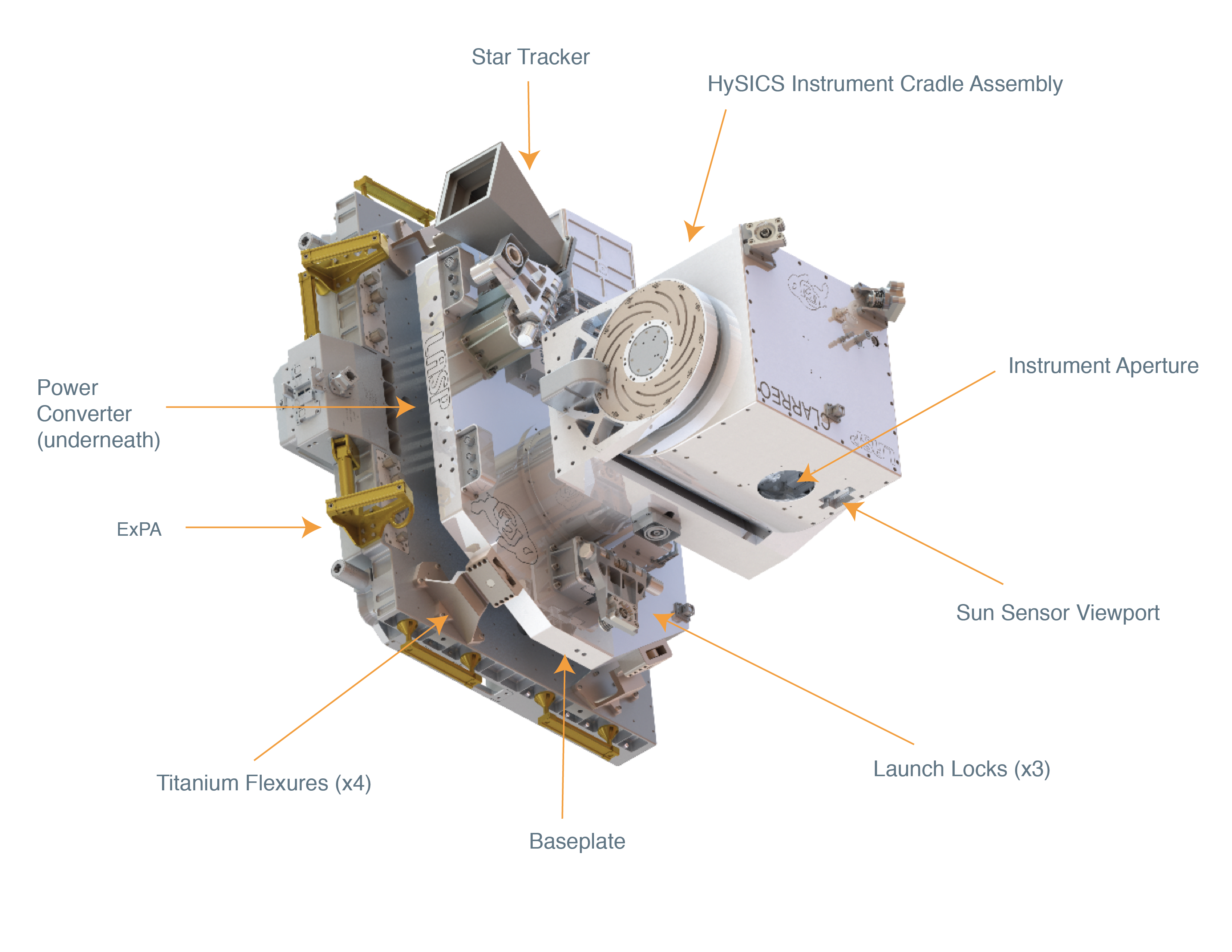 HySICS is designed to measure the spectral content of sunlight reflected by Earth in the visible and near-infrared portions of the electromagnetic spectrum [Espejo et al., 2011]. HySICS will take these measurements at high spatial resolution and unprecedented high accuracy levels (0.3%, k=1). HySICS will regularly calibrate itself in orbit with direct measurements of the Sun, among other calibration measurement modes, allowing it to achieve its groundbreaking level of accuracy [Kopp et al., 2017].

HySICS is a pushbroom imaging spectrometer, which means the instrument’s view of Earth — a 70 km wide swath — is “swept” along the Earth as HySICS, mounted on the International Space Station, orbits around Earth. The 70 km swath at nadir is comprised of 480 discrete measurement pixels. At each pixel location, HySICS simultaneously measures spectrally-resolved reflected sunlight from 350 to 2300 nm with 3 nm sampling. When aggregated over time and after applying calibration coefficients, the data comprise “image cubes” which are the spatially and spectrally-resolved measurements of Earth’s solar reflectance and radiance.

HySICS can directly view the Sun, Earth, and Moon.

HySICS has been uniquely designed to point the entire instrument to directly observe various targets including the Sun, the Moon, and the Earth. This pointing capability, enabled by the HySICS Pointing System, is essential to the HySICS calibration approach because it uses the Sun and Moon as on-orbit calibration sources. To do this successfully, HySICS must be capable of viewing the Sun, Moon, and Earth via the same optical path. This presents design challenges because direct solar irradiance from the Sun, when viewed from space above Earth’s atmosphere, is approximately 100,000 times brighter than sunlight reflected by the Moon or Earth.

To accommodate the difference in brightness between the Sun and other targets, engineers at LASP devised an innovative measurement method that uses a combination of precision circular apertures of different diameters and adjustable sensor integration times. When HySICS directly views the Sun, it does so through a small diameter aperture (0.5 mm) and with a short integration time. When HySICS views the Moon or Earth, it has a larger diameter aperture (20 mm) and longer integration time. This concept is similar to adjustments a photographer makes when taking photographs on a sunny day versus in a dark room. Being able to calibrate the same optical path across such a large dynamic range enables HySICS to provide high accuracy measurements of reflectance — the ratio of Earth-reflected sunlight to direct measurements of solar irradiance. See the graphic below for a schematic of the differences between how HySICS observes the Sun and darker targets (e.g. Earth, the Moon). 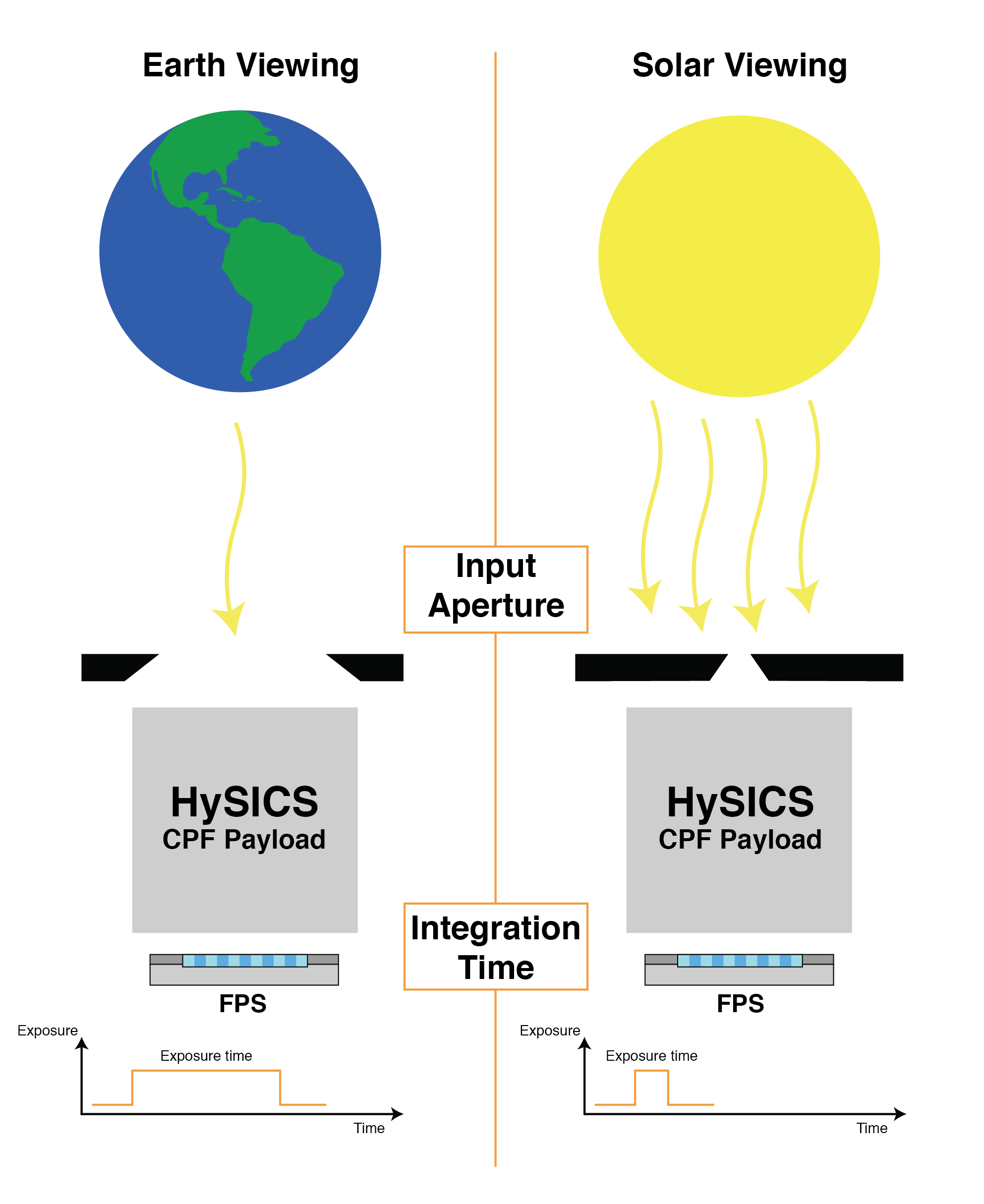 With HySICS as the heart of the payload, CLARREO Pathfinder will establish new unprecedented boundaries in accuracy (0.3%, k=1) of reflected sunlight measurements of Earth. Currently, operational reflected solar imagers have absolute calibration uncertainties of 2% at best because they are limited by various aspects of the calibration approaches and tools used [Kopp et al., 2017]. Alternatively, the HySICS calibration approach uses several on-orbit calibration measurements that are not limited by degradation or atmospheric uncertainties. See more detail on the Calibration Page. 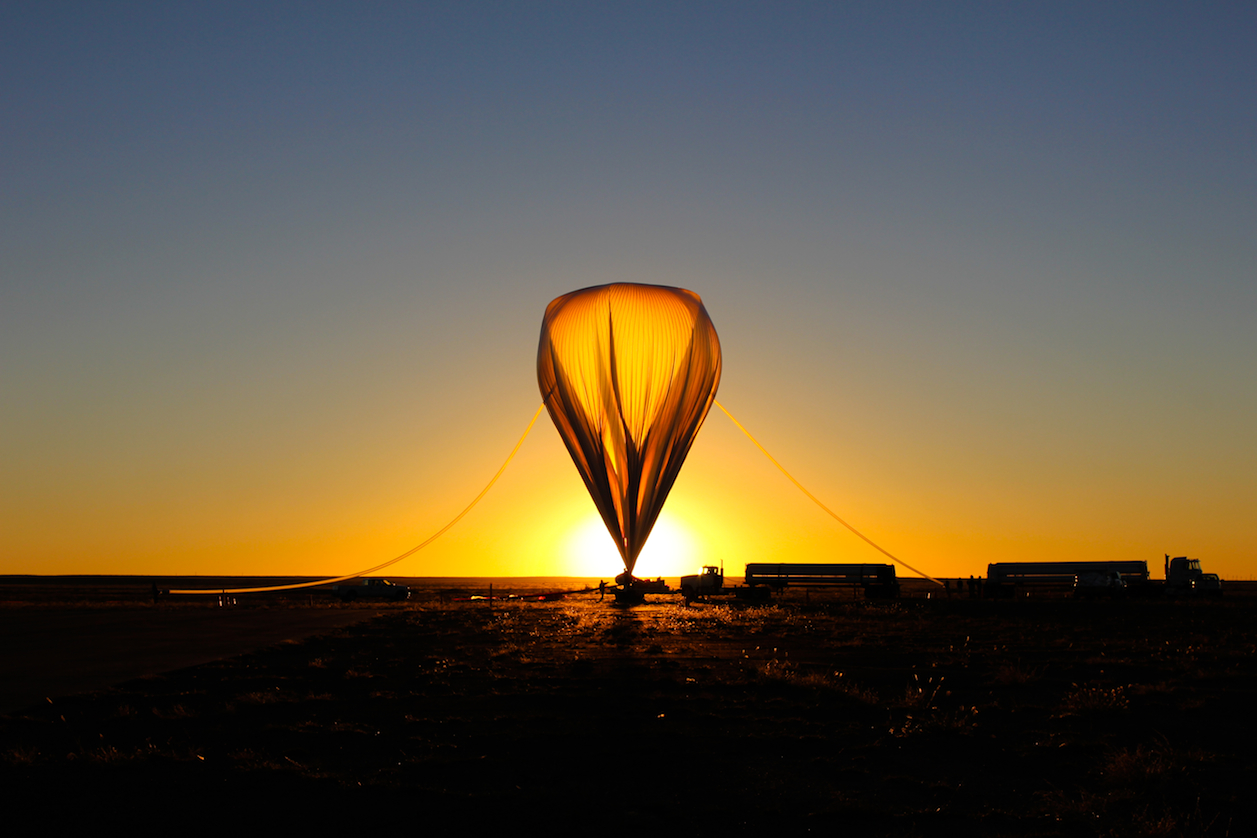 Operating from a high-altitude balloon, the HyperSpectral Imager for Climate Science (HySICS) flew at nearly 120,000 feet for more than 8 hours to demonstrate a solar calibration approach and Earth and lunar radiance measurements. (Courtesy Joey Espejo/LASP)

LASP has been maturing and testing the HySICS design for the past 10+ years.

LASP has been designing, maturing, and testing the HySICS instrument concept for more than a decade, including through two competitively-selected, NASA-funded Instrument Incubator Program (IIP) awards in 2007 and 2010. Using a HySICS instrument prototype, LASP demonstrated the HySICS measurement and calibration approaches during two high-altitude balloon flights in 2013 and 2014, both launched from Fort Sumner, NM. Balloon flights provide realistic, space-like conditions at a fraction of the cost of launching an instrument into space and are therefore an ideal means of testing new technologies that can be used in space. From a height above most of Earth’s atmosphere of 125,000 feet (38 km), HySICS, aided by the pointing precision of the NASA Wallops Arc Second Pointer (WASP), was able to make measurements of the Earth, Sun, and Moon during both daylight and night hours. In place of the WASP, CLARREO Pathfinder will be using a modified version of the TSIS Pointing System that also includes a Star Tracker and the capability to incorporate a variety of pointing modes to meet the mission objectives. During the balloon flights, HySICS performed as expected, collecting radiance data and periodically calibrating itself with highly accurate scans of the Sun. The data from these flights has been used to refine the HySICS design and data processing approach. Specific details about the HySICS design can be found in Espejo et al., [2011], and additional detail about the instrument and balloon flights can be found in Kopp et al., [2017].